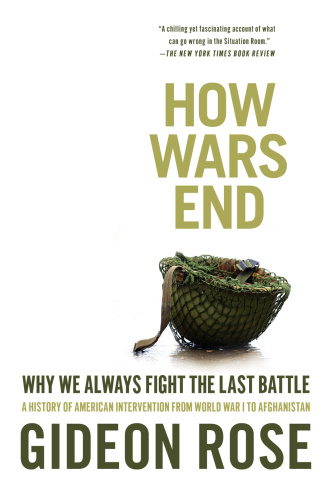 Description: IN 1991 THE UNITED STATES trounced the Iraqi army in battle only to stumble blindly into postwar turmoil. Then in 2003 the United States did it again. How could this happen? How could the strongest power in modern history fight two wars against the same opponent in just over a decade, win lightning victories both times, and yet still be woefully unprepared for the aftermath?
Because Americans always forget the political aspects of war. Time and again, argues Gideon Rose in this penetrating look at American wars over the last century, our leaders have focused more on beating up the enemy than on creating a stable postwar environment. What happened in Iraq was only the most prominent example of this phenomenon, not an exception to the rule.
Woodrow Wilson fought a war to make the world safe for democracy but never asked himself what democracy actually meant and then dithered as Germany slipped into chaos. Franklin Roosevelt resolved not to repeat Wilson’s mistakes…