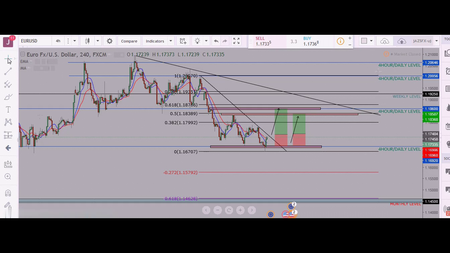 Fo r me trading is a business and not a hobby, and I really dislike working more than 4 h ours a day. My goal for each trading day is 40 pips profit compounding. And when I reached that g oal; I am finished until the next day. One thing I have learned; and that is greed is a des tructive force for any trader. So on the wayside this system is not for everyone.

The Paradox System has 3 charts; 1 hour, 2 hour, and the Daily. You do not need any chart below the 1 hour, or above the Daily. The 1 hour is your trading chart. The 2 hour is reference in chag of trends. The Daily is reference for long term trend and reference with s upport and resistance.

something (such as trading) that is made up of two opposite things and seems imposs ible but is actually true or possible.

What this is referring too in trading is Support and Resistance. And I do not mean drawing lines. When the market moves from bar to bar; it is also creating new S/R. And in realit y; Support/ Resistance are two opposites and seem impossible to trade; but are actually true and possible to trade. And how is it possible? It is known as trading in the moment. The closing of each bar is past history and no longer has value. BUT each bar creates a new support and/or resistan ce. And this is what the Paradox is all about.

I started with the Paradox in the mid‐2000 with a platform called Intellicharts. I eventually changed brokers and went with FXSolutions which had AccuCharts. And with AccuCharts I was able to develop and create the Paradox as it is today. But eventually FXSolutions g ot tired of the entire BS in which the USA had implemented in how we were to trade; so they packe d it all up and left the country. 2 months later FXSolutions Accucharts was history; unless you wante d to pay a monthly fee for it with the companys developer. Even then you got a bad deal becau se the companys AccuCharts are not the same as they were with FXSolutions. The reason was because of the programmer FXSolutions had; and he would program AccuCharts according to the trad ers needs.The platform I eventually decided upon to recreate the Paradox was NinjaTrader 7. And it is the same today as it was on Accucharts.

But over two years ago I decided to try and create the Paradox on MT4. Since MT4 is very limited on programming in creating bases and other criteria for the Paradox it became a cha llenge. But eventually the challenge became a success. I had to leave out some criteria and add ed others for it to become a Paradox.

Through the years I have trained 100s of traders with the Paradox. And now I am i n my old age, going on 71; and it is to pass on the Paradox.

The version Paradox I am giving away is the MT4. If you follow the rules and not be looking for shortcuts you can become a very successful trader with the Paradox, and no longer n eed to be here on the FF forum; or any other form for that matter. The greatest rule for tr ading is in the moment; and the moment means – trading one bar at a . Not what happened yest erday, or a year ago, not even the last bar. But on the 2 hour candle bar that is moving. Th at 2 hour candle is the actual Moment candle and you have 2 hours to trade it. This is not an overnig ht success as it takes to learn how to trade in the moment. So be looking at 6 months of you r in learning to trade in the moment. If you give yourself with patience you can trade the Paradox with at least 80+% weekly profits.

The Paradox is not a complicated system. In fact it is pretty simple provided you are patient and follow the rules. The problem with most traders is the garbage they had accumulated from other traders believing they have all the answers. It becomes evident of this fact when y ou have a trader wanting to change a proven system. What you do with this system is entirely on you . But if you want to become a trader that can virtually beat the market; then listen to my inst ructions very carefully.